By KL Bar Committee January 12, 2022
1 AND 2 DECEMBER 2021
VIRTUAL CONVEYANCING CONFERENCE 2021
Organised by the Corporate & Conveyancing Practice Committee (“CCPC”), this conference was held via Zoom on 1 and 2 December 2021. Fatma Aliya Binti Ahmed Ramzi was the emcee for the 2-day conference. The welcome speech for Day 1 was delivered by the Chairman of the Kuala Lumpur Bar Committee, Vivekananda Sukumaran and Tuan Jaiya Bin Abu, Director of the Land Management & Legislation Division (on behalf of the Deputy Director General of Lands And Mines). 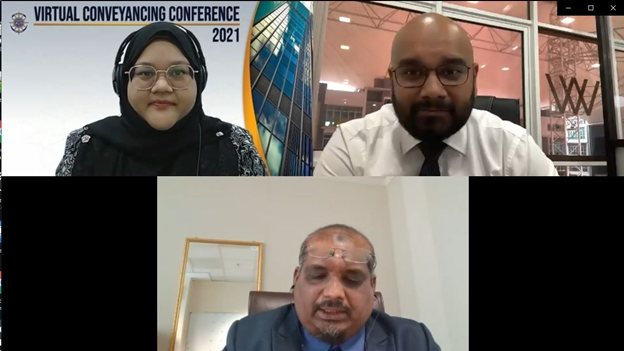 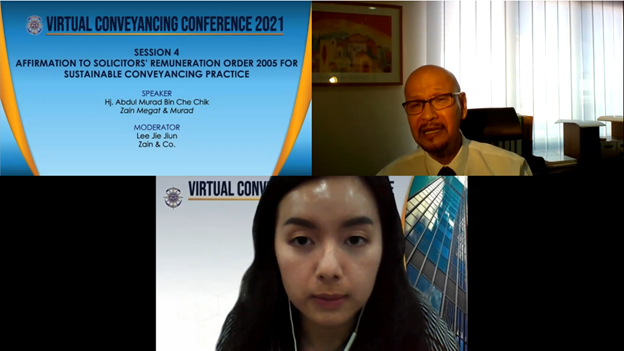 There were four sessions on 2 December 2021. The welcome speech for Day 2 was delivered by the Co-Chairperson of the CCPC, Lim Yin Faye. Tuan Haji Mohd Norshahnaz Bin Md. Zahir, Deputy Director of the Selangor Land and Mines Office gave the opening speech. 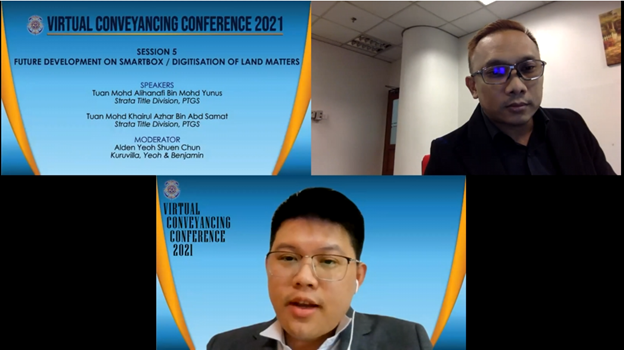 Session 6 entitled “Harnessing Technology for Productivity and Competency in Conveyancing Practice” from 11:15am to 12:15pm was presented by Leon Gan Han Chen and both sessions 5 and 6 moderated by Alden Yeoh Shuen Chun. 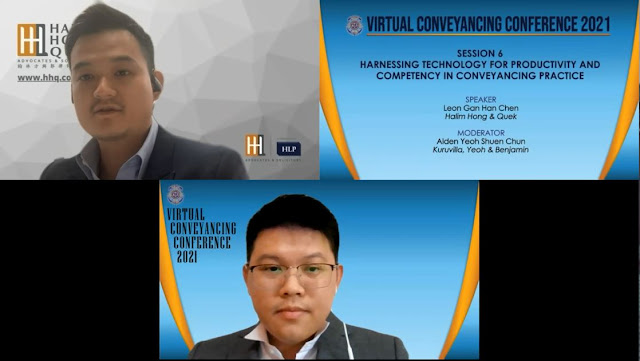 Session 7 entitled “Functions and Powers of a Private Liquidator and the Official Receiver; Conveyancing Process And Issues Encountered” from 2:00pm to 3:30pm was presented by Dato' Raveendra Kumar Nathan and Puan Sufi Nasuha Binti Abdul Halim. 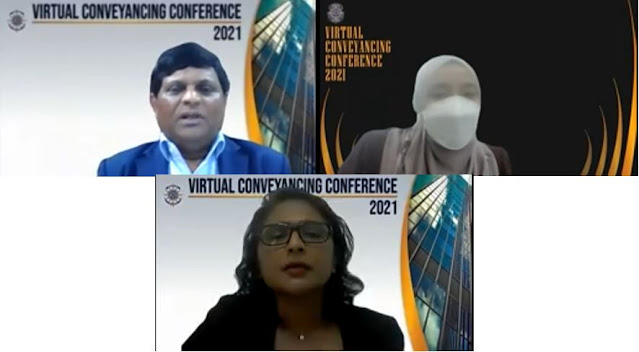 Session 8 entitled “Updates on Solution for Issuance of Strata Title Where the Developer Has Been Wound Up. Recourse Available To House Owner” from 3:35pm to 4:35pm was presented by Puan Ilmiah Binti Bakri and both sessions 7 and 8 moderated by R.Yogeswari.

The conference concluded with a closing speech from the Chairperson of the CCPC, Lim Yin Faye. We had 195 participants.

The Malacca Bar emerged as overall winner in this series-winning.

The R. Ponnudurai Challenge Trophy was presented by Yang Arif Anand Ponnudurai to the Malacca Bar Sport Chairperson during the event’s dinner. The dinner was held at The Malacca Club, Rotunda, Malacca and was well attended by the participants from both Bars. 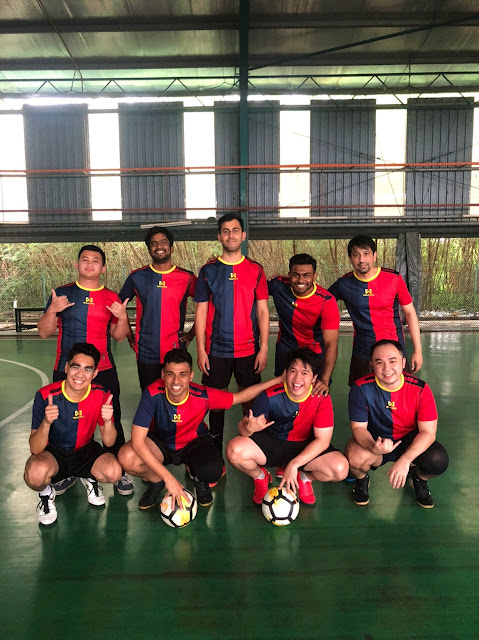 6 DECEMBER 2021
CORPORATE LAW FOR PUPILS AND YOUNG LAWYERS
Organised by the Pupils Committee, this webinar was conducted by Sheba Gumis. It was held via Zoom from 3:00pm to 5:00pm. We had 124 participants. 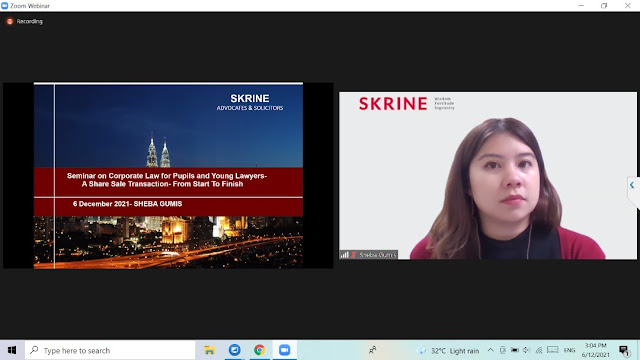 7 DECEMBER 2021
PREPARATION FOR CRIMINAL TRIAL
Organised by the Professional Development Committee, this webinar was conducted by Jayananda Rao. It was held via Zoom from 3:00pm to 5:00pm. We had 46 participants. 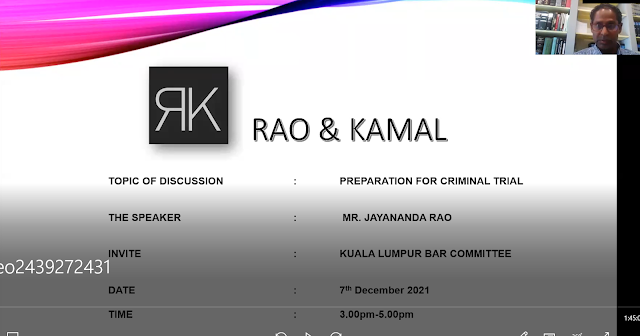 9 DECEMBER 2021
MEETING WITH THE DIRECTOR OF THE E-COURT DIVISION
The meeting was held at 11:30am via Zoom and the feedback from members pertaining to the EFS system was discussed at the meeting.
The Kuala Lumpur Bar Committee was represented by the Civil Practice and Court Liaison Committee (“CPCLC”) Chairperson Nimalan Devaraja, Honourary Secretary Alvin Oh Seong Yew and members of the CPCLC Ng Sai Yeang, Nizam Bashir and Kee Hui Yee. 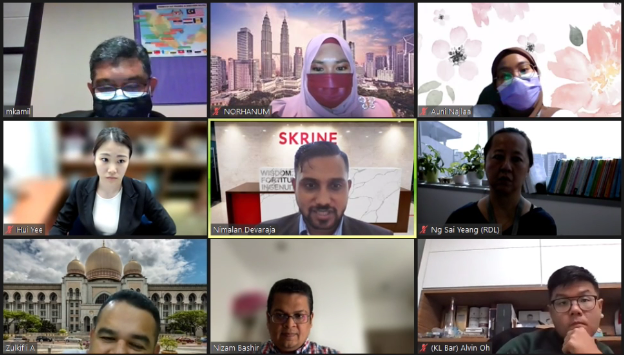 9 DECEMBER 2021
THE BASICS OF ANTON PILLER AND MAREVA INJUNCTIONS FOR PUPILS AND YOUNG LAWYERS
Organised by the Pupils Committee, this webinar was conducted by Vivian Kuan Hui Xian. It was held via Zoom from 3:00pm to 5:00pm. We had 86 participants. 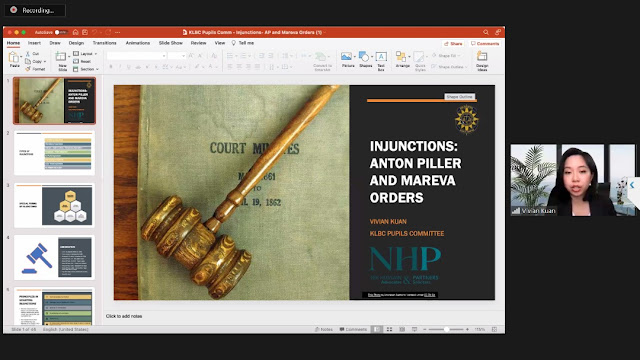 10 DECEMBER 2021
YEAR 2021 IN REVIEW: RESTRUCTURING AND INSOLVENCY CASES
Organised by the Professional Development Committee, this webinar was conducted by Kwan Will Sen and Nathalie Ker Si Min. It was held via Zoom from 3:00pm to 5:00pm. We had 47 participants.

13 DECEMBER 2021
YEAR 2021 IN REVIEW: FRAUD LITIGATION CASES AND TRENDS
Organised by the Professional Development Committee, this webinar was conducted by Lee Shih, Kwan Will Sen and Nathalie Ker Si Min. It was held via Zoom from 3:00pm to 5:00pm. We had 46 participants.

15 DECEMBER 2021
PUPILS INTRODUCTION SESSION - DIVERSITY & INCLUSION SESSION
The Pupils Introduction Session in December was held online via Zoom from 2:30pm to 5:30pm. Led by Rajsurian Pillai, the session was attended by 61 pupils. The purpose of the Pupils Introduction Session was to introduce pupils to the structure of the Malaysian Bar and the Kuala Lumpur Bar, the election to both the Bar Council and the Kuala Lumpur Bar Committee (“KLBC”) and the highlights of the Malaysian Bar. It included a session for pupils to raise issues and problems faced by them during their pupillage period.

Also included in the said Pupils Introduction Session was a session on “Diversity & Inclusion” which aim was to educate and create awareness among the pupils on, inter alia, issues related to gender sensitisation, sexual harassment and unconscious bias. The session was conducted by Thulasy Suppiah, Chairperson of the Gender Equality & Diversity Committee. 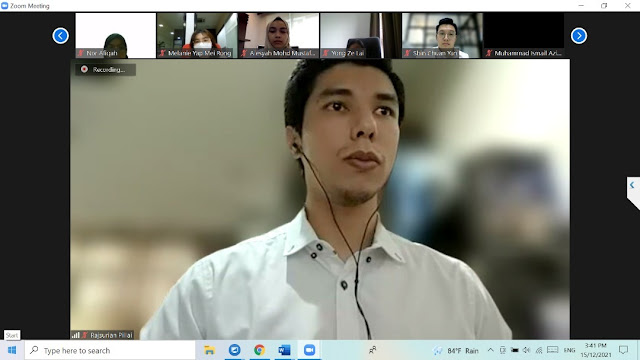 Among the issues discussed were the delay in responding to written inquiries, processing deposit refunds, updating document status and a proposal to upgrade the bankruptcy and winding up searches system.

17 DECEMBER 2021
SEXUAL HARASSMENT IN THE LEGAL WORKPLACE | FEEDBACK AND THE ROAD AHEAD
Organised by the Gender Equality & Diversity Committee, this webinar was held via Zoom/FB Live from 2:30pm to 4:00pm.  The speakers were Selvamalar Alagaratnam, Harleen Kaur and Vivek Sukumaran.  The event was moderated by Kelviin Manuel Pillay. We had 121 participants.